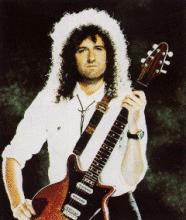 With a musical career spanning 3 decades, Queen founding member Brian May is a world-renowned guitarist (see his rig), songwriter, producer and performer.

Brian has penned 22 top 20 hits worldwide, among them the anthemic 'We Will Rock You', 'The Show Must Go On', 'I Want It All', 'Fat Bottomed Girls' and powerful ballads including 'Who Wants To Live Forever', 'No-One But You', and 'Save Me'. As an accomplished solo artist, Brian has recorded 2 highly successful solo albums - 1991's Back To The Light , including 'Too Much Love Will Kill You' an 'Driven By You', both Ivor Novello Award winners, and 1998's Another World.

Brian's songs continue to influence many different genres of musicians, with versions recorded by such diverse artists as Def Leppard, George Michael, Ted Nugent, Elaine Paige, 5ive, Shirley Bassey, Metallica, Claire Sweeney, Macy Gray and The Royal Philharmonic Orchestra conducted by Tolga Kashif. Brian has collaborated with numerous artists including Robbie Williams, The Foo Fighters, Guns'n'Roses, Zucchero and The Yardbirds, as well as making guest appearances at a number of charitable concerts where he has performed solo and, amongst others, with Bryan Adams and Luciano Pavarotti. Brian was proud to play feature guitar on the Winter Olympics 2002 Opening music for his good friend, composer the late Michael Kamen.

Two thousand and two was also the year in which Brian provided one of the defining images of the celebration of Queen Elizabeth's Golden Jubilee - when he opened 'The Party at the Palace Jubilee Concert' performing his own arrangement of God Save the Queen' live from the roof of Buckingham Palace. Seen by 1.2 million people outside the palace and on millions of televisions across the world, it will long remain one of those historical moments indelibly printed in time.

Brian developed an interest in film scoring when Queen became the first rock group to score a major film, 'Flash Gordon'. Definitive music for 'Highlander' followed, then an Opera for Steve Baron's 1996 'Pinnochio' and in 1999 Brian created a complete film soundtrack for the French art film 'Furia'. Brian is, of course, no stranger to the theatrical world. As well as his contributions to his wife Anita Dobson's live performance work, he wrote and performed the music for the Red and Gold Theatre Company's 'Macbeth', at London's Riverside Theatre in 1987.

The enormously successful and long awaited Queen rock theatrical ‘We Will Rock You' at London's Dominion Theatre has received standing ovations since opening in May 2002. Remaining the UK's best selling show acclaimed by over one million theatregoers, productions have since been opened in Melbourne and Madrid in 2003. Brian's role as producer and musical director extends to overseas productions, which sees shows opening in Perth, Brisbane, Las Vegas, Sydney, Moscow and Cologne in 2004 with further overseas productions planned for 2005.

In October 2002, Queen were honoured with a star on the Hollywood Walk of Fame, joining the Beatles as one of the few non-US bands to earn this accolade. This followed just 4 months after Queen were inducted into the Songwriters Hall of Fame, enrolled for "Queen's million selling achievements over three decades and in particular for having achieved the distinction of being the only group in which each of its members have achieved No.1 songs". Brian's ‘We Will Rock You' was particularly singled out for being one of the USA's most played songs as well as a sports anthem to hundreds of organisations and teams throughout the US. Brian's ongoing commitment to Aids awareness led to Queen becoming a driving force in the '46664' campaign in collaboration with The Nelson Mandela Foundation, which culminated in a concert in November 2003.

The concert, performed by leading African artists and a host of top international artists in front of an audience of 40,000 at Green Point Stadium, Cape Town, was simultaneously broadcast to a worldwide audience via TV, webcast and radio becoming the most widely distributed media event in history with an audience of over 2 billion in 166 countries.

More recently, Brian has joined an impressive list of world-famous talent with whom PepsiCo International has worked. During filming in Rome in September 2003, Brian recorded a unique version of his timeless track ‘We Will Rock You' with Beyonce, Pink and Britney Spears to accompany the epic Pepsi advertisement, which also features Enrique Inglesias.

Other credits include designing a planetarium show currently showing in Germany, re-mixing Queen recordings in 5.1 Surround Sound, and writing themes for several TV shows. He has also enjoyed lending his inspirational skills to the 3 top selling volumes of ‘The Best Air Guitar in the World Ever!'.

Brian also retains his keen interest in astronomy - a regular contributor to Sir Patrick Moore's 'Sky at Night' - and is currently working on a book on T R Williams, a prominent stereo photographer of the 1850's. He is patron to a number of charities including The Mercury Phoenix Trust and The British Bone Marrow Donor Association. Brian can also be addressed as Dr May, since being awarded an honorary degree of Doctor of Science by the University of Hertfordshire.