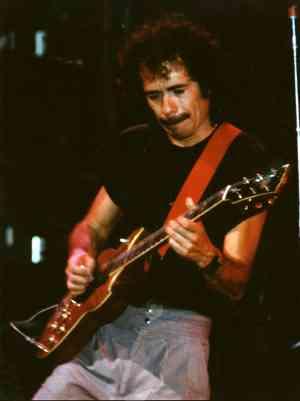 At the beginning of a new century and the dawn of a new millennium, Carlos Santana is at the pinnacle of a remarkable recording and performing career. Carlos' music has spanned five decades, outlasted countless musical trends, sold more than fifty million albums, played live to upwards of thirty million fans, and garnered countless awards and honors, including a 1998 induction into the Rock 'n Roll Hall Of Fame. For over thirty years, Santana has been tirelessly creating his own unique fusion of passionate, guitar-powered music, creatively blending potent rock'n'roll with blues-driven elements (see his rig), sensuous Afro-Cuban rhythms, and infusions of numerous other global music idioms.

Long before 'World Music' was coined as a phrase, Santana was making it and popularizing it-perhaps even defining it...and ever since Carlos and his band exploded onto the stage with an electrifying performance at the original 1969 Woodstock Festival, the world has indeed been listening.

Carlos Santana's album release, Supernatural, the 36th of his career, spotlights a legendary artist at the peak of his powers. Supernatural has sold in excess of ten million copies, and has been officially certified 'Dectillion Platinum' - Diamond Status-by the R.I.A.A. It won nine GRAMMYs at the 42nd Annual GRAMMY Awards in February 2000, including Album Of the Year, Best Rock Album, and Record Of The Year and Song Of The Year for 'Smooth,' Santana's unforgettable collaboration with alternative-rock favorite Matchbox Twenty's Rob Thomas. In 1999 anyone on the planet with a radio couldn't help but feel the sultry groove of this Latin flavored, mid-tempo rock masterpiece. Carlos explains that "Some songs are just like tattoos for your brain...you hear them and they're affixed to you"-'Smooth' proved its staying power with a record 12 consecutive weeks at #1 on Billboard's Hot 100 chart, making it the longest running #1 single of 1999.

Supernatural's second single, 'Maria, Maria,' co-written by Wyclef Jean (of The Fugees and solo fame) and featuring on vocals, The Product G & B is an infectious Spanish-textured stroll fusing Latin, African and pan-Caribbean sounds-its multi-genre appeal won it ten weeks in the top slot on the Hot 100 as well as a GRAMMY for Best Performance By A Duo or Group With Vocals. This eclectic tour de force album also guest stars multiple-GRAMMY winning artist Lauryn Hill, the legendary Eric Clapton, Dave Matthews, Everlast, Eagle Eye Cherry, and Maná, among others.

Supernatural, well, supernatually bridges cultural, generational and musical realms, forging multi-dimensional, multi-cultural creative partnerships. Carlos says that "Every musician who participated was on the same wavelength and artistic energy as I was...Supernatual is a beautiful example of synchronicity...making it was a truly glorious experience." The album was Santana's 1999 debut for Arista Records, where Carlos was reunited with mentor Clive Davis thirty years after originally signing his very first major label contract with the executive at Columbia in 1969. The result is an instantly classic, powerhouse collection of incredibly diverse songs and soulful vibes united by the spirit and musical passion of Carlos Santana.

This most recent success is a tremendous high point of an artistic journey that began some fifty years ago in the Mexican village of Autlan, where at age five, Carlos was introduced to 'traditional music,' by his father Jose, an accomplished mariachi violinist. The family moved to the border boom town of Tijuana in 1955, where Carlos seriously took up guitar, studying and emulating the sounds of B.B. King, John Lee Hooker, T. Bone Walker and other greats he heard on the radio. As much as he was inspired by the early training he received from his father in traditional musical form and theory, Carlos soon realized his dream was to break free and play rock 'n roll. He began performing with local bands like The T.J.s, adding his own personal flair to the popular songs of the 1950s. As he continued playing with different bands up and down the bustling 'Tijuana Strip,' Carlos Santana began to hone his considerable skills and invent his inimitable sound.

In 1961, he moved Stateside to San Francisco, joining his family, who had relocated there the previous year. Destiny had most certainly brought Carlos to the right place at the right time, planting him smack in the middle of the of the burgeoning and hugely influential Bay Area music scene...as well as in an era-defining melting pot of cultural, political, and artistic change. In this climate, Carlos continued to evolve his unique, genre-bending style, and in 1966, he took his music to the people with the debut performance of the Santana Blues Band. For the next two years, the group was swept up in a whirlwind of acclaim and popularity that carried them from the boards of Bill Graham's historic Fillmore West to the main stage at the epochal Woodstock 'Peace, Love, Music' Festival, where on August 16, 1969, the Santana band's gale-force Latin-flavored rock was delivered to the masses.

The world embraced Carlos with a passion, captivated by music that was always changing, exploring, and growing, yet always quintessentially and unmistakably Santana, heralded by a guitar prowess that today remains among the most distinctive ever. Each new release--including to date ten platinum and nine gold albums-emerged as a reflection of Carlos' personal growth and artistic evolution. Fans also reveled in his humanitarian messages and spiritual affirmations-subtle urgings towards peace, joy, acceptance, compassion and understanding--that have been consistently communicated in a gentle, heartfelt manner at live performances around the globe.

The Santana Band achieved double-platinum status their first time out with the 1969 Columbia debut album Santana, featuring the hit single 'Evil Ways,' and quadruple-platinum with Abraxas, the classic 1970 follow-up, which boasted among its tracks 'Black Magic Woman' and the incomparable Tito Puente's composition 'Oye Como Va.' Other milestones in the Santana discography include 1971's Santana III featuring 'Everything's Coming Our Way'; the 1974 Columbia Greatest Hits package; the 1997 2-CD collection Live At The Fillmore featuring performances from their historic 1968 shows; the comprehensive 1995 Legacy boxed-set retrospective Dance Of The Rainbow Serpent and their single-disc 1998 Best Of Santana distillation; solo projects including the 1972 musical adventure Live With Buddy Miles and the highly personal Blues For Salvador (1987); and adventurous Guts & Grace/Island releases including 1994's Brothers, which featured collaborations with Carlos' sibling Jorge and nephew Carlos Hernandez, and Mystic Man, with Italian composer Paolo Rustichelli.

Significant filmed repertoire include the 1988 video retrospective Viva Santana, the 1993 South American concert video Sacred Fire, and 1997's CD-ROM A History Of Santana: The River Of Color And Sound. Most recently, FOX Television aired the gala special A Supernatural Evening With Santana, a celebration of the record-setting album featuring performances with Rob Thomas, Lauryn Hill, Dave Matthews, and Sarah McLachlan, among others; Aviva International and Image Entertainment released the DVD and video of this memorable event. Whatever the medium or the genre, Carlos's uncompromising passion for his art shines clearly through.

This passion also paved the way for ventures into new musical and geographic territories, including the scoring of the feature film La Bamba, embarking on a 1988 tour with great jazz saxophonist Wayne Shorter, and participating in 1987's Rock 'n Roll Summit, the first-ever joint US-Soviet rock concert. Carlos Santana has also contributed his talents to the benefit of numerous charitable causes, among them Blues For Salvador, San Francisco Earthquake Relief, Tijuana Orphans, Rights Of Indigenous Peoples, and education for Latin youth in association with the Hispanic Education & Media Group. He's received numerous civic and humanitarian commendations over the years. Career recognition and kudos have been legion. The Santana Band was the first to earn CBS Record's Crystal Globe Award for sales of more than five million albums internationally.

Carlos has been voted Best Pop-Rock Guitarist multiple times in Playboy Magazine's annual Reader's Poll. He received a 1988 GRAMMY for Best Rock Instrumental Performance and was the subject of a special Recording Academy (NARAS) tribute concert during the 1996 GRAMMY Awards, in conjunction with his induction into the Hollywood Rock Walk. He's received ten Bay Area Music Awards, including six Best Guitarist and three Musician Of The Year nods, and in 1997 was among the select inaugural group-- along with Bill Graham and Jerry Garcia - inducted into the BAMMY Hall Of Fame; that same year, he was named Latino Music Legend of the Year by the Chicano Music Awards. In 1996, Billboard Magazine bestowed Carlos with the Century Award, their highest honor for lifetime creative achievement, and in 1998, he was immortalized in the entertainment world with a star on the Hollywood Walk of Fame.

Today, millions of fans, new and old, enjoy the work of this extraordinary musician, both through his extensive catalogue repertoire and via the phenomenal impact of Supernatural and its accompanying world tour. Just as Carlos Santana brought the work of Latin music icon Tito Puente to a new generation of rock fans in 1970, he now completes the circle by introducing his massive world music following to an exciting line-up of rock, pop and hip hop personalities via Supernatural's dynamic roster. More than three decades into his career, Carlos Santana is more vital and relevant than ever, one of the biggest musical forces on the planet. His work unites our global village, transcending cultural, genre, and language barriers...its soul-stirring celebration of life, spirit, brotherhood and diversity is as powerful as its creator's magical guitar virtuosity. Carlos Santana is a jubilant 21st century man, and like the new century, he's just getting started.