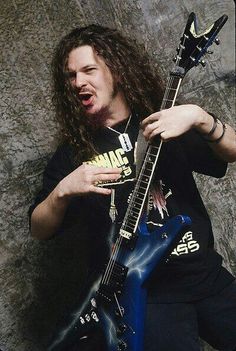 While the majority of acclaimed hard rock guitarists of the early '90s focused primarily on songwriting rather than shredding away, there were a few exceptions to the rule, like Pantera 's Dimebag Darrell . Born Darrell Lance Abbott on August 20, 1966 in Dallas, Texas, Darrell was born into a musical family, as his father, Jerry Abbott, was a country & western songwriter and producer. It wasn't long before Darrell became more interested in hard rock/heavy metal (see his rig), especially upon his discovery of the masked quartet Kiss , and their guitarist, Ace Frehley.

Darrell soon became serious about guitar playing, and he entered in local guitar talent competitions, which resulted in his winning an instrument that he would eventually become closely associated with, the Dean ML (a cross between a Flying V and an Explorer). By the early '80s, Darrell (who was going by the name Diamond Darrell ), had co-formed Pantera , along with his brother, drummer Vinnie Paul and bassist Rex Smith (then known as Rex Rocker).

Although the band would one day become one of metal's leading forces, Pantera early on reflected their influences at the time, Def Leppard , Judas Priest , and (visually), Mötley Crüe . With singer Terry Glaze fronting the band, Pantera issued a trio of albums that the group would latter 'disown' -- 1983's Metal Magic, 1984's Projects in the Jungle, and 1985's I Am the Night - before Glaze exited.

Pantera found a much better fit with singer Phil Anselmo , but it took a while for the new lineup to click, as their first recording together, 1988's Power Metal, was a step in the right direction, but still not up to the high standards the group would one day set. Yet to have issued an album on a major label, Pantera finally made the jump in 1990, signing on with the Atlantic subsidiary East West. Almost overnight, it seemed like Pantera was reborn, as they completely rejected their early pop-metal direction in favor of a much more heavy and brutal one, which focused on such bands as Slayer , Metallica , and Black Sabbath .

This touched off a string of classic metal releases that would see Pantera become one of the world's top metal bands -- 1990's Cowboys From Hell, 1992's Vulgar Display of Power, and 1994's Far Beyond Driven. Darrell (who was now known as Dimebag Darrell ) soon became recognized as one of metal's finest players, as evidenced by his annual appearances in guitar publication polls. Further Pantera releases followed throughout the early 21st century, before the group appeared to go on hiatus.

As a result, Darrell and Vinnie Paul formed a new metal outfit, Damageplan . Additionally, Darrell has appeared on recordings by other artists, including Anthrax (Stomp 442, Volume 8: The Threat Is Real, and We've Come for You All) and Nickelback (The Long Road), in addition to solo recordings for the Supercop motion picture soundtrack, and a cover of Ace Frehley 's "Fractured Mirror" for the tribute album Spacewalk: A Salute to Ace Frehley.

Darrell and his brother also supplied music for an album by cult country artist David Allan Coe , called Rebel Meets Rebel. Tragedy struck in Columbus, OH on December 8, 2004 when Darrell , only 38, was shot dead by a concertgoer while on stage with Damageplan . His sudden death sent shockwaves throughout the music community where the guitarist was remembered as one of the most influential stylists in modern metal.