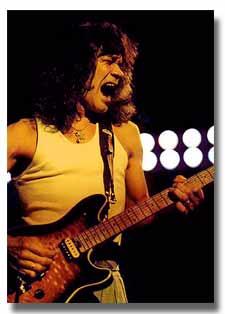 With their 1978 eponymous debut, Van Halen simultaneously rewrote the rules of rock guitar and hard rock in general. Guitarist Eddie Van Halen redefined what electric guitar could do, developing a blindingly fast technique with a variety of self-taught two-handed tapping, hammer-ons, pull-offs, and effects that mimicked the sounds of machines and animals (see his rig). It was wildly inventive and over the top, equaled only by vocalist David Lee Roth, who brought the role of a metal singer to near-performance art standards.

Roth wasn't blessed with great technique, unlike Eddie, but he had a flair for showmanship that was derived as much from lounge performers as Robert Plant. Together, they made Van Halen into the most popular American rock & roll band of the late '70s and early '80s, and in the process set the template for hard rock and heavy metal for the '80s.

Throughout the '80s, it was impossible not to hear Van Halen's instrumental technique on records that ranged from the heaviest metal to soft pop. Furthermore, Roth's irony-drenched antics were copied by singers who took everything literally. One of these was Sammy Hagar, an arena rock veteran from the '70s who replaced Roth after the vocalist had a falling out with Van Halen in 1985. Hagar stayed with the band longer than Roth, helping the group top the charts through the late '80s and early '90s. However, the group's sales began to slide in the mid-'90s, just as tensions between Hagar and Eddie began to arise. In one of the most disastrous publicity stunts in rock history, Hagar was fired (or quit) and Roth was brought back on, seemingly as a permanent member, but only for two songs on a greatest-hits album. He was subsequently replaced by Gary Cherone, a former member of Extreme.

Through all the upheaval over lead vocalists, Eddie Van Halen and his prodigious talent remained the core of Van Halen. The son of a Dutch bandleader, Eddie and his family moved from the Netherlands to Pasadena, CA, in 1967, when he was 12 years old and his older brother, Alex, was 14. As their father supported the family by playing in wedding bands, Eddie and Alex continued their classical piano training. Soon, both boys were enraptured by rock & roll. Eddie learned how to play drums and Alex took up the guitar, eventually switching instruments. The brothers began a hard rock band called Mammoth and began playing around Pasadena, eventually meeting David Lee Roth.

At the time, Roth, who had been raised in a wealthy Californian family, was singing in Redball Jet. Impressed by the Van Halen brothers, he joined forces with the group. Shortly afterward, bassist Michael Anthony, who was singing with Snake, became a member of Mammoth. After discovering that another band had the rights to the name Mammoth, the group decided to call themselves Van Halen in 1974, rejecting the proposed Rat Salade. For the next three years, Van Halen played throughout Pasadena, Santa Barbara, and Los Angeles, playing both clubs and hotel bars. The band's repertoire covered everything from pop and rock to disco, but they eventually worked in their own original material.

Within a few years, they had become the most popular local band in Los Angeles, and Eddie became well known for his groundbreaking technique. In 1977, Kiss' Gene Simmons financed a demo recording session for Van Halen after seeing them at the Starwood Club. On the strength of Simmons' recommendation, Mo Ostin and Ted Templeman signed Van Halen to Warner Bros., releasing the band's debut the following year. Van Halen became a hit due to strong word of mouth, constant touring, and support from AOR radio.

Within three months the album had gone gold, and five months later it went platinum. It would eventually sell over six million copies, thanks to the album rock staples "You Really Got Me," "Jamie's Cryin'," and "Runnin' With the Devil." Van Halen II, released in 1979, continued the band's success, as "Dance the Night Away" became their first Top 20 single. Women and Children First (1980) didn't have any charting singles, but was a success on the album charts, reaching number six. The band supported the album with their first headlining, international arena tour, and the group was quickly on their way to being superstars. Released in 1981, Fair Warning wasn't quite as popular as their previous records, yet it still peaked at number six. Diver Down, released in 1982, was a huge hit, spawning a number 12 cover of Roy Orbison's "(Oh) Pretty Woman" and reaching number three.

While all of their previous albums were successful, Van Halen didn't become superstars until 1984, when their album 1984 became an across-the-board smash. Released on New Year's Day, 1984 rocketed to number two on the strength of the number one single "Jump." Like many songs on the album, "Jump" was driven by Eddie's new synthesizer, and while Roth was initially reluctant to use electronics, the expansion of the group's sound was widely praised. Throughout 1984, Van Halen gained steam, as "I'll Wait" and "Panama" became Top 15 singles and "Hot for Teacher" became a radio and MTV staple. Despite the band's breakthrough success, things were not well within the band. During their 1984 tour, each member played separate solo sets and were physically separated on the stage.

Roth was unhappy with Eddie's appearance on Michael Jackson's 1983 hit "Beat It," and Van Halen grew tired of the comic antics of Roth. In 1985, Roth released a solo EP, Crazy From the Heat, which spawned hit covers of "California Girls" and "Just a Gigolo/I Ain't Got Nobody." When Roth delayed the recording of Van Halen's follow-up to 1984, he was fired from the band. Most observers were taken by surprise when Van Halen named Sammy Hagar as Roth's replacement. The former lead singer of Montrose, Hagar's solo career had been sporadically successful, highlighted by such arena metal hits as "Three-Lock Box" and "I Can't Drive 55." Though many critics suspected Hagar wouldn't be able to sustain Van Halen's remarkable success, his first album with the band, 1986's 5150, was a huge hit, reaching number one and spawning the hit singles "Why Can't This Be Love," "Dreams," and "Love Walks In."

Released in 1988, OU812 was just as successful, earning stronger reviews than its predecessor and generating the hits "When It's Love" and "Finish What You Started." For Unlawful Carnal Knowledge, released in 1991, was another number one hit, partially due to the hit MTV video for "Right Now." Van Halen followed the album with their first live record, the double album Van Halen Live: Right Here, Right Now in 1993. By the spring 1995 release of Balance, tensions between Eddie Van Halen and Sammy Hagar had grown considerably. Eddie Van Halen had recently undergone well-publicized treatment for alcoholism, and Hagar was notorious for his party-hearty ways, even writing a paean to Amsterdam's hash bars with "Amsterdam" on Balance.

Furthermore, the band had become subject to criticism that they simply repeated a formula. While Balance was successful, entering the charts at number one and selling two million copies shortly after its release, it stalled quickly afterward. The band wanted to release a greatest-hits collection, but Hagar balked at the idea, escalating tensions even further. Following a skirmish in 1996 over the recording of a song for the Twister soundtrack, Eddie decided to make a change by switching singers. Van Halen began recording new material with Roth without informing Hagar, who went ballistic upon learning of the group's reunion. According to Hagar, Eddie fired him shortly afterward; Van Halen claimed Hagar quit. Roth proceeded to record two new songs for Van Halen's Best Of, Vol. 1, and once the reunion became public, the rock media reacted positively to the news; MTV began airing a welcome back commercial days after the announcement.

However, the reunion was not to be. Following an appearance at the MTV Music Awards, Van Halen fired Roth from the band, claiming that he was only on board to record two new songs. Roth said that he was duped into recording the songs, believing that the reunion was permanent. Former Extreme vocalist Gary Cherone was announced as the band's new lead singer. Though the resulting Best Of, Vol. 1 was a success, Eddie Van Halen's reputation as a nice guy was tarnished once the entire affair was over. Cherone's long-awaited debut with Van Halen, entitled Van Halen III, was finally released in March of 1998. Although the album debuted high on the charts, crashing in at number three, it quickly slipped down the charts, since the reception to the album from fans, critics, and radio was mixed.

After Van Halen III proved to be the worst-selling album of Van Halen's long and illustrious career (the ensuing world tour was poorly attended as well), Cherone was dismissed from V.H. in 1999. Immediately, rumors began to swirl once more of an impending David Lee Roth/Van Halen reunion. Things were kept completely hush-hush in the V.H. camp until early 2001, when David Lee Roth went public on his website with an update, confirming that he had recorded several new songs with the band (tracks that Roth described as amazing, phenomenal, and astonishing), but hadn't heard back from them since the previous summer.

Only a few days after Roth's news, Eddie Van Halen admitted to the public that he was battling cancer, but was told by his doctors that chances were good for a complete recovery. In the summer of 2001, Eddie told MTV News that V.H.'s remaining members had penned a total of three albums worth of new material and that they were still unsure of who their next singer would be. Months later, fans were shocked to hear that the band parted ways with Warner Brothers, their label since 1979. The band blamed the label for promoting younger bands, while also admitting that they had not yet found Cherone's replacement and were no longer considering Roth.