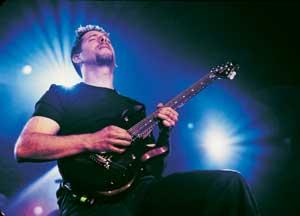 John grew up on Long Island, Kings Park to be exact, where he, John Myung & Kevin Moore all attended school together. He started playing guitar at the age of 12 (After a brief fling at age 8 when he noticed his sister got to stay up late for her organ lessons. His little plan didn't work out being that his guitar lesson was after school, and soon lost interest.) He quickly realized his influences and was determined to reach their level of ability. Some early influences include Yngwie Malmsteen, Randy Rhoads, Iron Maiden, Stevie Ray Vaughan, Yes, Rush etc (see his rig).

His musical education began with a great music theory class he took in high school. Being primarily self taught, he did receive a few lessons when he attended Berklee College of Music in Boston, where he learned jazz composition and harmony. While at Berklee John and John Myung who was also attending, met Mike Portnoy and started a band called Majesty which would later turn into Dream Theater. John has recorded 7 albums with Dream Theater, and has also been involved in several side projects including Liquid Tension Experiment with Tony Levin, Age of Impact and even a Sega Saturn game called Necronomicon.

His love for lyric writing combined with his unique composing style of progressive fusion shape the sound of Dream Theater. John lives with his wife, Rena, and 3 children, SamiJo, Reny and Kiara in New York. When he's not playing guitar he spends most of his time with his wife and children inline skating, biking, working out and watching movies.