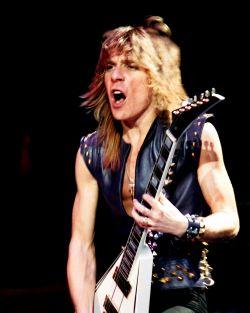 While the most dominating and influential heavy metal guitarist of the '80s would have to be Eddie Van Halen, Ozzy Osbourne's original guitarist, Randy Rhoads, was one of the few guitarists of the era to create his own signature style. While just about every other guitarist was merely copying Van Halen's unorthodox two-hand tapping technique, Rhoads was one of the first heavy metal guitarists to incorporate classical music into his playing (later picked up by such six-string shredders as Yngwie Malmsteen).

Although he only issued a pair of major-label albums during his lifetime, he immediately reached legendary status upon his tragic death in early 1982. Rhoads was born on December 6, 1956, in Santa Monica, CA. Rhoads came from a musical family (his mother was a school music teacher) and began playing guitar before he even reached the age of ten. By his teenage years, Rhoads had become interested in the hard rock sounds of Mountain, Led Zeppelin, and Alice Cooper and as his musical taste changed, so had his guitar style.

After playing in several school bands, Rhoads hooked up with singer Kevin DuBrow and formed Quiet Riot. Along with Van Halen, Quiet Riot became a major draw on the L.A. club circuit even though new wave and punk were the most dominating musical styles on the Sunset Strip. While the band wasn't able to secure a U.S. record deal, they released two albums in Japan: 1977 's Quiet Riot and 1978's Quiet Riot II.

Frustrated that the band wasn't getting anywhere in their homeland, Rhoads tried out for the guitar position in ex-Black Sabbath singer Ozzy Osbourne's solo band. Rumor has it that Rhoads was hired before he even played a note because he "looked the part." Osbourne's first solo release, 1980's Blizzard of Ozz, has become one of hard rock/heavy metal's greatest releases of all-time, largely due in part to Rhoads' fiery playing. Such tracks as "I Don't Know," "Crazy Train," "Suicide Solution," and "Mr. Crowley" have become metal standards and all showcased Rhoads' talents (also of note was a brief classical acoustic guitar piece he penned for his mother, "Dee").

The album was a surprise hit as the new band toured, resulting in another album a year later, Diary of a Madman. Although Rhoads voiced dissatisfaction with his playing on the album in interviews at the time (they were rushed to meet a deadline), his six-string work was astounding, especially on such tracks as "Over the Mountain," "Flying High Again," "Little Dolls," and the title track. Rhoads was finally getting his due as a guitarist (he just won the Best New Guitarist award from Guitar Player magazine), when he was killed in a freak airplane accident while on tour in Florida on the morning of March 19, 1982.

As with other talented musicians who died far too early, Rhoads' stature in the hard rock world reached mythic proportions. A Rhoads/Osbourne live album (Tribute) that was originally to be issued in 1982 was shelved until 1987. The album was an automatic Top Ten hit, as it proved once and for all the incredible skill and endless potential that the young guitar player possessed. Jackson Guitars also started issuing a line of Randy Rhoads-model guitars, based on a prototype that was finished just prior to his death. And 11 years after his passing, a Rhoads-era compilation was issued by his former band, Quiet Riot, entitled The Randy Rhoads Years. Rhoads' death remains one of rock's all-time greatest tragedies.