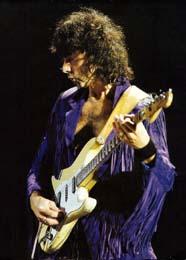 In Los Angeles in 1975, he took over the New York band Elf , replaced the guitarist, and renamed the resulting heavy metal quintet Ritchie Blackmore's Rainbow.

They made the first album, Ritchie Blackmore's Rainbow. Driscoll, Gruber, and Soule then departed and were replaced by Jim Bain (bass), Tony Carey (keyboards), and former Jeff Beck Group drummer Cozy Powell (b. December 29, 1947, Cirencester, England) for the second album, Rainbow Rising (1976), and the third, On Stage, which made the U.K.

Top Ten. (From the third album on, the band was credited only as Rainbow). Carey and Bain then left and were replaced by David Stone (keyboards) and Bob Daisley (bass) for the fourth album, Long Live Rock 'N' Roll (1978), another Top Ten U.K. hit, after which Daisley and Stone left. In 1979, Blackmore , Dio , and Powell added former Deep Purple bassist Roger Glover (b. November 20, 1945, Brecon, South Wales) and Don Airey (keyboards), and started to make the fifth album, the U.K. Top Ten Down to Earth, but Dio left during the recording sessions and was replaced by Graham Bonnet .

The album included two U.K. Top Ten singles, "Since You've Been Gone" and "All Night Long." Powell and Bonnet left in 1980 and were replaced by Bob Rondinelli (drums) and Joe Lynn Turner (vocals), and the lineup of Blackmore , Glover , Airey , Rondinelli , and Turner made the sixth album and fourth U.K. Top Ten LP Difficult to Cure in 1981. The album produced the U.K. Top Ten single "I Surrender." Then Airey left and was replaced by David Rosenthal. In 1982, Blackmore , Glover , Rondinelli , Turner , and Rosenthal made their seventh album and fifth U.K. Top Ten, Straight Between the Eyes. The eighth album, Bent out of Shape, was released in 1983 and featured the band's first U.S. Top 40 hit, "Stone Cold."