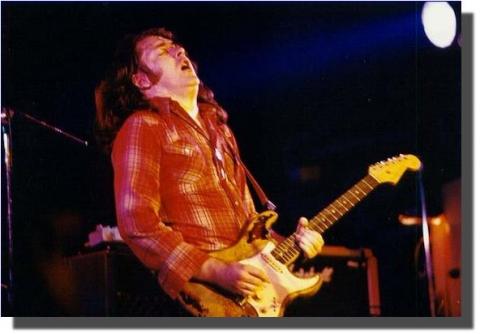 For a career that was cut short by illness and a premature death, guitarist, singer, and songwriter Rory Gallagher sure accomplished a lot in the blues music world.

Although Gallagher didn't tour the U.S. nearly enough, spending most of his time in Europe, he was known for his no-holds-barred, marathon live shows at clubs and theaters around the United States.

Gallagher was born in Ballyshannon, County Donegal, Irish Republic, on March 2, 1948. Shortly after his birth, his family moved to Cork City in the south, and at age nine he became fascinated with American blues and folk singers he heard on the radio. An avid record collector, he had a wide range of influences, including Leadbelly , Buddy Guy, Freddie King, Albert King, Muddy Waters , and John Lee Hooker. Gallagher would always try to mix some simple country blues songs into his recordings.

Gallagher began his recording career after moving to London, when he formed a trio called Taste . The group's self-titled debut album was released in 1969 in England and later picked up for U.S. distribution by Atco/Atlantic. Between 1969 and 1971, with producer Tony Colton behind the board, Gallagher recorded three albums with Taste before they split up. Gallagher began performing under his own name in 1971, after recording his 1970 debut, Rory Gallagher for Polydor Records in the U.K. The album was picked up for U.S. distribution by Atlantic Records, and later that year he recorded Deuce, also released by Atlantic in the U.S.

His prolific output continued, as he followed up Deuce with Live in Europe (1972) and Blueprint and Tattoo, both in 1973. Irish Tour 1974, like Live in Europe, did a good job of capturing the excitement of his live shows on tape, and he followed that with Calling Card for Chrysalis in 1976, and Photo Finish and Jinx for the same label in 1978 and 1982. By this point Gallagher had made several world tours, and he took a few years rest from the road. He got back into recording and performing live again with the 1987 release (in the U.K.) of Defender. His last album, Fresh Evidence, was released in 1991 on the Capo/I.R.S. label. Capo was his own record and publishing company that he set up in the hopes of eventually exposing other great blues talents.

Some of Gallagher's best work on record wasn't under his own name; it's stuff he recorded with Muddy Waters on The London Sessions (Chess, 1972) and with Albert King on Live (RCA/Utopia). Gallagher made his last U.S. tours in 1985 and 1991, and admitted in interviews that he'd always been a guitarist who fed off the instant reaction and feedback a live audience can provide. In a 1991 interview, he told this writer: "I try to sit down and write a Rory Gallagher song, which generally happens to be quite bluesy. I try to find different issues, different themes and different topics that haven't been covered before...I've done songs in all the different styles...train blues, drinking blues, economic blues. But I try to find a slightly different angle on all these things. The music can be very traditional, but you can sort of creep into the future with the lyrics."

Gallagher passed away from complications owing to liver transplant surgery on June 14, 1995, at age 47. For a good introduction to his unparalleled prowess as a guitarist, singer, and songwriter, pick up Irish Tour 1974, Calling Card, or Fresh Evidence.