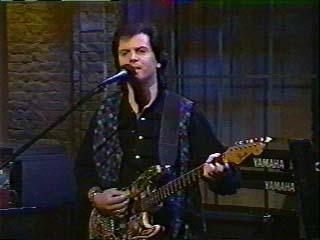 Trevor Rabin was born in South Africa in 1954. He first began playing guitar at the age of 12 after having had piano lessons since he was a toddler. He formed his first band in 1968, at only 14 years old. After being drafted, Rabin played both guitar and bass in the entertainment unit. He began doing session work after his discharge from the military in 1972. It was also that same year that he hooked up with a group of musicians who began recording as Rabbit. That group recorded a total of two albums over the next few years. By 1978, Rabin had left the group and began releasing solo albums.

By 1981, he had released three solo albums and attracted the attention of Chris Squire. Squire, at that time, was fresh out of the recently broken-up Yes. Squire contacted Rabin about joining a new group he was assembling called, Cinema. At that point, Cinema was Squire and Yes drummer Alan White. During the work on their debut album (with original Yes keyboardist Tony Kaye having been added to the lineup), Jon Anderson became involved in the project. After his vocals were added to the music, the group decided that this was really Yes and they made that name change. The resulting album, 90125, became the biggest hit the group has ever had, and the single "Owner of a Lonely Heart" catapulted them onto MTV.

Rabin stayed with Yes until 1995, releasing four studio albums during that time (the aforementioned 90125, Big Generator, Union, and Talk). Rabin also found time to release another solo album, Can't Look Away, while still in the group. Since 1995, he has been using the majority of his musical talents on movie soundtracks. He has worked in various capacities on film soundtracks such as Glimmer Man, Enemy of the State, Armageddon, Con Air, and others. He also put in a guest appearance on Rick Wakeman's Return to the Centre of the Earth album.