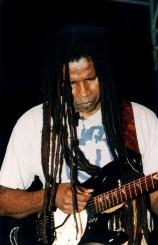 As the lead guitarist of Living Colour and a co-founder of the Black Rock Coalition, Vernon Reid has done a great deal to undermine stereotypical expectations of what music black artists ought to play; his rampant eclecticism encompasses everything from hard rock and punk to funk, R&B and avant-garde jazz, and his anarchic, lightning-fast solos have become something of a hallmark as well.

Born in London, Reid and his family emigrated to Brooklyn while he was a child; he began playing guitar at age 15, initially studying jazz and progressing quickly. In 1980, he joined drummer Ronald Shannon Jackson's Decoding Society, a cutting-edge jazz group with whom he appeared on six albums; over the course of the decade, Reid went on to work with a wide variety of experimental musicians - Defunkt, Bill Frisell, John Zorn, Arto Lindsay, and Public Enemy, among others.

Around 1983, Reid formed the first version of what was to become Living Colour; in 1985, with journalist Greg Tate, he formed the Black Rock Coalition, an organization devoted to opening doors in the music business for black musicians who were not content being confined to the roles of soul crooner or rapper.

Living Colour did not really begin to jell until their lineup stabilized in 1986, and when Mick Jagger saw the group perform at CBGB's and invited them to appear on his Primitive Cool album.

Jagger went even further, producing two demo tracks and helping to convince Epic to sign the group. Living Colour debuted to massive critical acclaim in 1988 with Vivid; the group lasted through Time's Up (1990) and Stain (1993) before disbanding in 1995. Reid has continued to make periodic appearances on others' recordings, and in 1996, he issued his solo debut, Mistaken Identity. He resurfaced in 2002 as one half of Yohimbe Brothers, a duo also featuring DJ Logic. The two released the Front End Lifter album in September and subsequently toured the United States throughout October.