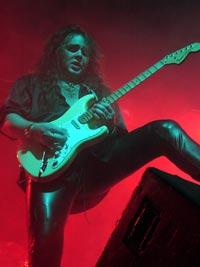 Yngwie Malmsteen is arguably the most technically accomplished hard rock guitarist to emerge during the '80s. Combining a dazzling technique honed over years of obsessive practice with a love for such classical composers as Bach , Beethoven , and Paganini , Malmsteen 's distinctively Baroque, gothic compositional style and lightning-fast arpeggiated solos rewrote the book on heavy metal guitar (see his rig).

His largely instrumental debut album, Rising Force, immediately upped the ante for aspiring hard rock guitarists and provided the major catalyst for the '80s guitar phenomenon known as "shredding," in which the music's main focus was on impossibly fast, demanding licks rather than songwriting.

Malmsteen released a series of albums over the course of the '80s that, aside from slight differences in approach and execution, were strongly similar to Rising Force, and critics charged him with showing little artistic progression. He was also reviled as an egotist whose emphasis on blazing technique ultimately made for boring, mechanical, masturbatory music with no room for subtlety or emotion.

Malmsteen responded by insisting that since he was already playing music he loved, he had no desire to develop any further, and that his love did come through in his playing. He also vehemently insisted that it was his imitators, not him, who reduced songwriting and composition to merely generic vehicles to show off the guitar player's amazing technique.

Toward the end of the decade, Malmsteen fell out of favor with metal audiences, and even some of his musician fan base seemed to tire of him and the incredible amount of practice it would take for them to emulate him. Following a series of personal setbacks, tragedies, and even injuries, Malmsteen eventually resurfaced on small, independent labels and then recorded at a prolific, rapid pace, continuing to play the music he loved in his patented neo-classical style.

Yngwie (pronounced "ING-vay") Malmsteen was born Lars Johann Yngwie Lannerback in Stockholm, Sweden, in 1963, later adopting his mother's maiden name following his parents' divorce. He was an unruly child, and his mother tried without initial success to interest him in music as an outlet. However, when seven-year-old Yngwie saw a television special on the death of Jimi Hendrix featuring live performance footage of Hendrix setting his guitar on fire, he became obsessed with the guitar, learning to play the music of both Hendrix and favorites Deep Purple . Through Purple guitarist Ritchie Blackmore's use of diatonic minor scales over simple blues riffs, Malmsteen was led toward classical music, and his sister exposed him to composers like Bach , Beethoven , Vivaldi , and Mozart .

He spent hours practicing obsessively until his fingers bled, and by age ten, his mother allowed him to stay home from school to develop his musical talents, particularly since he was considered a behavioral nightmare. Also at age ten, Malmsteen became enamored of the music of 19th century violinist/composer Niccolo Paganini , as well as Paganini 's flamboyant style and wild-man image; this would provide the blueprint for Malmsteen 's synthesis of classical music and rock.

By the time he was 18, Malmsteen was playing around Sweden with various bands attempting to find an audience for his technically staggering instrumental explorations, but most listeners preferred more accessible pop music; frustrated, Malmsteen sent demo tapes to record companies overseas. When Mike Varney , president of Shrapnel Records -- a label synonymous with the term "shredder" - heard Malmsteen 's tape, he invited the guitarist to come to the United States and join the band Steeler in 1981.

Steeler recorded one album with Malmsteen on guitar, but dissatisfied with the band's rather generic style, Malmsteen moved on to the group Alcatrazz , whose Deep Purple and Rainbow influences better suited the guitarist's style. Still not quite satisfied, Malmsteen formed his own band, Rising Force , with longtime friend and keyboardist Jens Johansson . The new band's first album, also called Rising Force, was released in 1984; it was a largely instrumental affair spotlighting Malmsteen 's incendiary guitar work and Johansson 's nearly equally developed technique. The album was an immediate sensation in guitar circles, winning countless reader's polls in guitar magazines, reaching number 60 on Billboard's album chart (no mean feat for an instrumental album), and receiving a Grammy nomination for Best Rock Instrumental Performance.

Malmsteen 's subsequent albums, Marching Out and Trilogy, also sold quite well and consolidated his reputation and influence as a composer as well as a soloist. However, on June 22, 1987, a speeding Malmsteen crashed his Jaguar into a tree; in breaking the steering wheel with his head, he received a blood clot in his brain which nearly killed him and extensively damaged the nerves leading to his picking hand. In the course of recovery, he learned that his mother had died and that his manager had swindled him out of his earnings. Undaunted, Malmsteen regained the use of his hand and recorded Odyssey, his most accessible, radio-friendly collection to date; the single "Heaven Tonight" widened his audience beyond a devoted core of guitar fans and helped push the album into Billboard's Top 40.

Following a world tour including the then-Soviet Union, the Rising Force unit disbanded, and Malmsteen formed a new band in his native Sweden for 1990's Eclipse. The album was a success in Europe and Japan, but stiffed in the U.S. without much promotion.